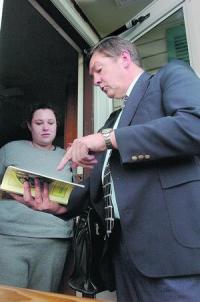 WASHINGTON, DC - In an effort to increase the number of respondents contacted via door-to-door interviews, the US Census Bureau has enlisted the help of Jehovah’s Witnesses. The newly hired canvassers were put to work immediately.

“We’re proud to announce this new partnership between the Census Bureau and Jehovah Witnesses,” said Census director Robert Groves. “Our new recruits are already skilled in door-to-door canvassing so we expect to save the taxpayers millions of dollars in training costs.”

The government declined an offer from the Mormon Church to be part of the effort. The Census Bureau worried that Mormon canvassers tend to be too well dressed which may give the impression they are not actually government employees.

After completing a census form with a member of the Jehovah’s Witnesses, Robert Stocker seemed pleased with the experience. “He was a very nice fellow,” Robert explained. “It only took a few minutes to fill out the form. Then I invited him in to hear my Amway presentation?”