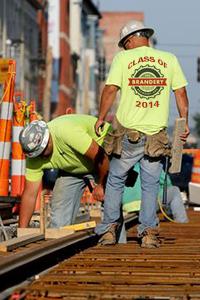 CINCINNATI, OH - Members of the streetcar construction crew have taken advantage of working in close proximity to The Brandery, a Cincinnati tech startup accelerator. While working on the Vine Street phase of the streetcar project near the Brandery's headquarters, crew members gained indirect exposure to valuable startup advice and high level mentoring.

After Brandery personnel noticed the streetcar crew's interest, Brandery leaders offered to coach the crew on Vine Street as the construction progressed. Crew leader Jeffrey Mathison said, "Simply working near the Brandery made all of us feel immersed in startup culture so we decided to apply for acceptance into this year's class."

After the crew was accepted into the Brandery class of 2014, Brandery trainers walked alongside the track construction every day while displaying slide decks about startup management and branding best practices. The streetcar crew has now graduated with the startup class of 2014. They are not sharing specifics yet about their startup company but they say it embeds emerging cloud technology in streetcar tracks to help people make organic connections triggered by digital reference points.

The streetcar crew hopes to secure Series A funding by the time it reaches the corner of Race and 12th streets.