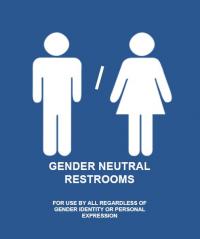 WASHINGTON, DC - Archivists at the Smithsonian have recently discovered documents from the Founding Fathers which may shed some light on their views of Constitutional power involving current events. Deep in the archives of the Smithsonian vaults have appeared correspondence and pamphlets directly addressing the rights of Americans to use public restrooms.

Historians are pouring over the newly discovered documents and are debating the meaning and intent behind them. One passage, found alone on a piece of parchment that was collected from Independence Hall in 1776 reads, “As the Creator bestoweth us with the needs of evacuation, so shall the governance bestow upon its citizens the rights of places to do so therein.” Many believe that this unattributed sentence is evidence that the Founding Fathers advocated bathroom use without government restrictions, but historian Dr. Kenneth Walden disagrees. “I’m quite sure this is not an endorsement of government oversight of public restrooms,” said Dr. Walden. “Rather, it is a request that members of the committees meeting in the Hall not do their business right next to the front door. Especially since that was a very hot summer.”

Other notes from Constitutional Convention meetings appear to suggest that Ben Franklin advocated the use of unisex bathrooms, going so far as to advocate it be written into the Constitution. However, the unisex aspect he was particularly interested in turned out to be a hope that men’s facilities be staffed by female French prostitutes. His interest in the subject waned after other members of the Constitutional Congress distracted him. Franklin was coaxed out of the meeting with the help of the Sargent at Arms. And several French prostitutes.

The findings are the most significant restroom related material from the Founding Fathers since an unpublished copy of The Federalist papers was discovered which advocated an 11th amendment to the Bill of Rights which was to read, “If ye were to sprinkle whilst ye tinkle, please be a sweetie and wipe the seatie.”