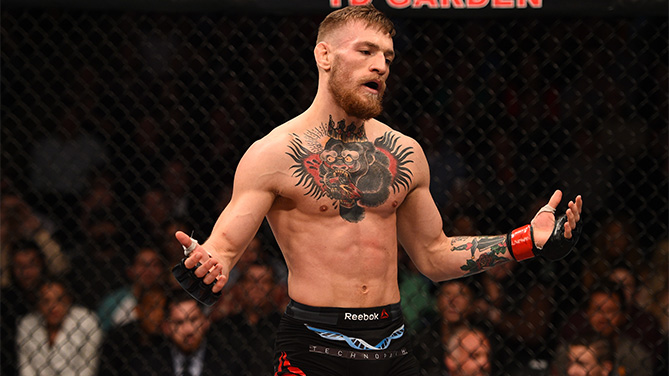 NEW YORK, NY - After campaign manager Corey Lewandowski was charged with battery, Donald Trump vowed to stand behind him and not make any changes in staff. However, in order to help the campaign while Corey Lewandowski deals with his legal issues, mixed martial artist Conor McGregor has been hired by the Trump team as interim campaign manager. "I'm looking forward to helping out Mr. Trump in any way I can," said McGregor. "I believe I can put together some staffing that will help facilitate polling and the ground game for some of the upcoming primaries. I also will meet with Mr. Trump on a daily basis to fine tune the subtleties of his message for media appearances. Also, I will always be available to grab, hit, punch, and kick people. Protesters, reporters, men, women, whatever. I'm ready to dole out some pain." "I like this kid's spirit," said Trump. "He's plucky. I think he can definitely keep his cool and take care of business as my campaign manager. And, if he does not keep his cool, I'll be more than happy to pay his legal bills." When asked about McGregor's relative lack of experience as a political operative, Trump explained why it was not a concern. "How much experience do I have running for President?" asked Trump. "Very little. That's how much. And yet, I am spectacular at it. Many say I'm the best who has ever run. Many many people. The same is going to be true of Conor. He is going to be tremendous. Really, really good. Even though he is an immigrant. At least I think he's an immigrant. He talks with some kind of weird moon-man accent that I can't put my finger on. However, he is here legally. As far as I know. Ted Cruz is Canadian. But unlike Ted Cruz and those illegal Mexicans, I can tell you that I'm quite sure Conor McGregor is not a rapist or a pervert. Plus, it's only temporary. When Corey is ready to come back to work full time, we have a job for him. Unless Conor wants to fight him for it. That would be tremendously entertaining. Tremendous."