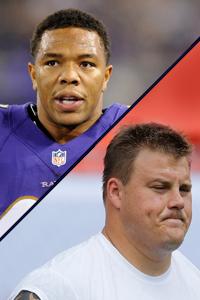 BALTIMORE, MD - In an effort to begin healing his public image and make peace with an angry public, Ray Rice has begin taking steps toward reforming himself. One of the first moves his made toward this goal was hiring former Miami Dolphins offensive lineman Richie Incognito as his life coach.

“This kid needs some serious help,” said life coach Incognito. “He really needs to bear down and quit being such a little wimp. He needs to sack up and make good apologies. He needs to bring some intensity to the table instead of just flying around like a little fairy. Also, he really needs to learn how to throw a punch. Dude totally hits like a girl. Reminds me of my grandma.”

Rice decided to hire Incognito as his life coach upon the advice of the Baltimore Ravens front office. “They gave me Richie’s number and told me to give him a call,” said Rice. “All I know is that the Ravens organization has handled this situation perfectly, so their advice is like gold to me.”

Hiring Incognito took him away from the life he had begun to build for himself after being shunned by the NFL. “I was working as a customer service rep for Time Warner Cable,” Richie explains. “I had little pansies calling me all day and crying about how they couldn’t get their wifi to work and how the History Channel looked fuzzy. I’d tear them a new one for a few minutes and then transfer them to some dude in India who knows how to fix stuff. They told me I could come back whenever I wanted. Maybe I can bring Ray Rice back with me. He’ll never get better. He’s thrown a dozen punches in elevators in the four days I’ve been working with him.”