NEWS
Gnomes uncertain how to count selves in Census
Business 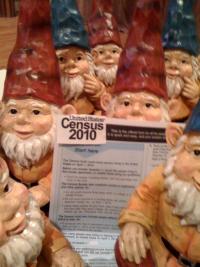 WASHINGTON, DC - As the deadline approaches for filing census forms, there is significant confusion among the gnome community as to how they should go about counting themselves.

Gnomes from gardens, yards, and front stoops across the country fear that their numbers may not be properly recorded, depriving them of much needed federal funds. “I have no idea how to proceed,” said a Chicago area gnome. “I haven’t even had a form delivered, and even if I did I wouldn’t know whether I should count myself as a full person, half a person, or if they have a box I can check for ‘magical being.’”

Other census related problems for the gnome population include how to count groups of gnomes that are fused together as a single entity, where to place themselves as members of a family, and being able to hold a pencil in their stubby little hands in order to fill out the form.

Officials at the US Census have done little to address the concerns of gnomes. Census spokesman Robert Erwine explained, “We’ve got plenty of overly confused humans to deal with first. After we take care of them we can move on to gnomes, gremlins, gargoyles and perhaps lawn geese.”