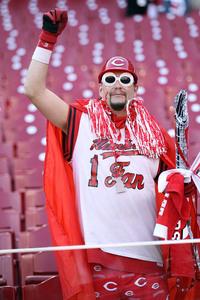 CINCINNATI, OH - Richard Lee’s overindulgence on Reds Opening day has resulted in a hangover that is predicted to last through the first half of the season, up to and including the All Star break.

Richard’s day began by attending a radio broadcast at 8 o’clock in the morning. “I’m not exactly sure what station it was,” he explains. “I actually did a little ‘pre-gaming’ at the house before my friends came to pick me up at 7:30. I know it was somewhere in the general area of Cincinnati and that they radio show was a guy and another guy with maybe a girl or another guy or something. Everything after the car ride was a blur.”

From there, the events of the day become even more unclear. “I’m pretty sure I went to the game, because I had a ticket,” said Richard. “But it may have been a ticket to Kings Island’s Haunted House left over from last October. I don’t think that would have gotten me into the park, but I sort of remember seeing the field and remarking on how green the grass was.” Friends later pointed out that Richard spent a good part of the afternoon laying on a green welcome mat outside of his home.