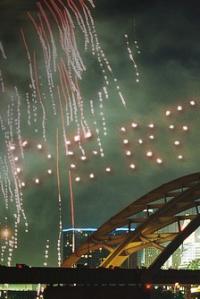 CINCINNATI – Local residents witnessed a surprising typo during this year’s annual WEBN Labor Day Fireworks. WEBN officials say a pyrotechnic version of the word ‘DERF’ appeared during the fireworks display instead of the intended traditional word, ‘WEBN’. Authorities say the typo appears to have suspicious origin and is being investigated.

Several WEBN employees say they witnessed a DERF Magazine employee possibly bribing a WEBN intern at the fireworks assembly site. A witness reportedly overheard a man saying to the WEBN intern, “I know it’s hard to earn a living in the radio business but this twenty dollar bill could have your name on it if you look the other way while I quickly insert the letters D, R, and F. The E is already there.”

People watching the fireworks from the Kentucky side of the river were further confused because the word DERF was transposed as the word FRED from their vantage point. Many Kentuckians with lesser literacy skills did not notice the difference.

The Rozzi family, who produces the fireworks each year, say the apparent security breakdown is a disappointment. However, a Rozzi family spokesperson complimented the choice of font and color. “It could have been worse. At least all of the letters appropriately matched the existing letter E.”

DERF magazine officials insist all DERF employees were accounted for during the time of the fireworks at the first of several company mass-downsizing functions. Also a company spokesman explained the DERF Magazine corporation recently adopted a baby and could not have afforded the $20 bribery cost. Officials are available at the DERF hotline to provide additional information: 513.549.DERF (3373)